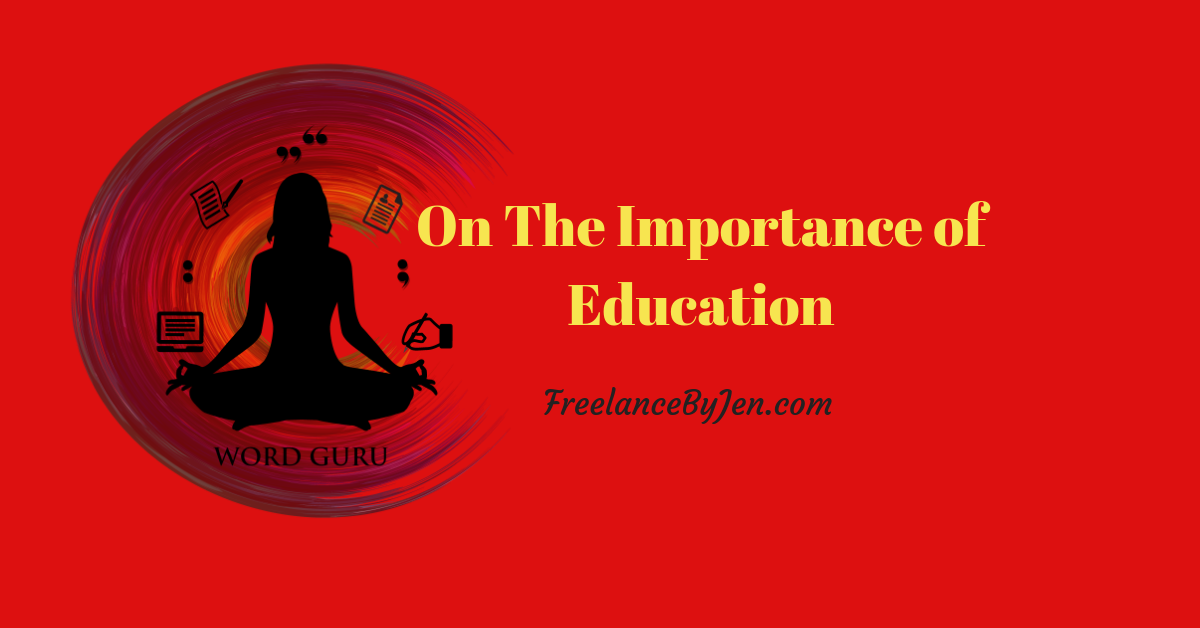 My sister wished me a happy gradversary this morning, and it hit me that it’s been five years today since I received my master’s degree.

I never expected that my degrees would translate to making a lot of money. Public relations and communication don’t really pack the punch of, say, an MBA or uh, rocket science or something. The reason I went back to school was first because I was given an incredible opportunity by my beautiful friends Bill and Marilyn Edmonds, and second because I was so. damn. tired of being a pharmacy technician.

So it was that what began out of desperation ultimately taught me things I didn’t expect to learn. You know, much like virtually everything that happens to everyone ever.

But let’s break it down further, because those of you considering going back to school or continuing school might benefit from the insight, even if it’s just to learn what NOT to do.

The first thing my education taught me was you gotta get there yourself. This has been my favorite saying for so many years, and it’s because it’s so simple and so true.

You can want something. That’s the easy part. Just sitting around, wanting it…hell, anyone can do that. You can even have someone urging you to get it. An accountability partner, if you will. Someone who reminds you of WHY you want the thing. Who reminds you that you TOLD them to tell you the exact things they’re telling you. But if you don’t decide, yourself, on your own, for the right reasons to you, to do something and stick with it?

Coming out of my bachelor’s degree, I still had post-chemo, crazy corkscrew, new hair and almost no confidence. I was in a real bad place on a personal level, and my son and stepsons were definitely the bright point in my life (so, so grateful for having those boys around for as long as I did). I loved the people I worked with but not my job so much, wanted my marriage to work but was already realizing that I couldn’t make it work by myself, and pretty much hated everything about myself from the outside in and vice versa.

And – surprise – my bachelor’s degree didn’t make any of that any different. There was no magic wand that gave my hair back while removing 20 pounds, that gave me confidence and money and parenting skills and a zest for life.

And – surprise – I wasn’t satisfied. So, after one semester off, I decided I’d apply for a graduate assistant position at Pitt State. If I got the job, I’d HAVE to go back to school, right?

I got the job. It was the best thing and the most terrifying thing. I had been fortunate with tuition up to that point, but this master’s degree situation was going to be 100% me. Plus I had a larger mortgage payment, plus I had a kid getting his driver’s license, and expenses were just a whole thing.

But I wanted it. Being sick had been a serious wake-up call for me, and there was no turning back. During chemo, I’d look at pictures of people on Facebook, going on vacations, flipping their own real hair, flexing their muscles, and generally looking like health and happiness personified.

I’d like to say that I never did. But life is a process.

So I kept my pharmacy job on weekends, started working nights at the movie theater, began my day job as a GA in Career Services, and started my full-time master’s program (that wasn’t even remotely online, like, at all).

My commute was 100 minutes round-trip, five days a week. I spent a lot of time eating in the car, but honestly I was doing that anyway. (And can I say for a minute, bless my little car? I lived well into gravel-road territory, precisely in the middle of nowhere, and I put that sweet baby Saturn Aura – another monthly payment that I couldn’t really afford – through so much in the five years I had her.)

And I learned the things I was paying to learn – how to write an effective seminar paper, how to analyze a case and write my own Supreme Court decision, how to plan and execute Teacher Interview Days and job fairs for Career Services, and how to meticulously, exactly, manage my time down to the minute every single day for 18 months.

I had a planner’s mind and love of writing already, though. I’d even say that there wasn’t much NEW information I picked up in grad school. I loved to write and I got all kinds of opportunities. My thesis was a dream – I got to fly to Maine, sneak into a paper mill in the middle of the night in full welder’s gear, and interview 13 night-shift welders one at a time in their motel rooms at 7 a.m. while they drank themselves to sleep. My hardest lesson was not in writing 70 pages about that, but rather in going through the process of getting it approved by my committee – a committee of three professors I adored, three minds I respected and admired and flat coveted.

But the best thing that came from my master’s degree, the most valuable lesson I learned then and practice still, was learning to structure time.

We all have the same amount of time every day. What we do with it is a blessing and a curse. And if you have too much of it on your hands, well, that can be the most dangerous thing of all.

So I calendared. I made to-do lists and made sure each became all-done lists. I gave myself specific times to study – because with three jobs, plus drive time, I didn’t have much time to spare. Seriously, almost every minute was spoken for. I had to make sure the kids had food in the house to eat, that they knew I loved them, and – I hoped – that they knew I was doing this for all of us.

I got the hood and I got the honor cord. I had my own hair again. But the biggest thing I had was the very, very beginning of recognizing that I could really do things without help and that I didn’t have to settle for things that were hurting me because I didn’t think I could do any better.

So what today really is, is a realization that five years ago today was the day I decided to start living my life without fear. And without abuse.

Some parts of that fresh resolve took longer than others. I eliminated external forces of abuse fairly quickly, but the internal…oh, man. I had decades of poor habits to beat. I started first by exercising and beginning to watch my diet. But it wasn’t until January 1, 2018 that I decided to stop drinking. A few slip-ups and six months later, on July 4, I got drunk for the last time. My boss-level fight, though, is with sugar.

The point is that formal education is a great opportunity that I think everyone who can should take advantage of…as long as you don’t expect it to change your life.

My life didn’t change until I changed it. The lessons I learned along the way happened to come during times of education occasionally, but the real way to learn is to be open to change. To be honest with yourself. To look in the mirror – maybe even literally – and go full Stuart Smalley. To know that rock bottom means that you can either lie there and die or eventually realize that you’re hungry, or uncomfortable, or just really, really need a shower – and get the fuck up. Take a step. And then take another.

It’s been a great five years, sure. But it’s also been a really great life.